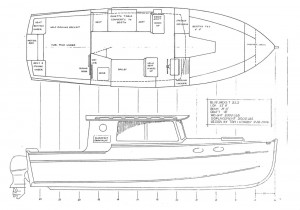 Many have asked about the possibility of having a dinette in the Bluejacket 24.  I have resisted based on the inescapable fact that fitting a dinette in the existing interior would create crowding and/or elimination of other desirable cruising features.  The interior of the Bluejacket 24 was arrived at from experience in boats that try to be all things. In such boats the designer has often tried to fit a quart in a pint pot. This approach leaves little room for adults to be comfortable on a cruise of any length.  A dinette could be fitted in the existing pilothouse if the crew seat were eliminated.  In the belief that the mate will enjoy cruising much better if a crew seat is included that affords both comfort and a view equal to the pilot, I rejected this approach. A look at many other small cruising powerboats will reveal that such a seat for the mate is seldom provided.

After a very serious request for a Bluejacket with a dinette, I took another look at what might be a good solution.  The result is the Bluejacket 25.5.  A primary goal was to disturb the proven interior a little as possible.  By extending the pilothouse aft by 18″ it has been possible to provide a dinette that converts into a third berth large enough for an adult.  In a pinch and with some added complexity in the form of pull out or flip up support, this berth could sleep two. Neither the cockpit nor the spaces forward of the steering station have been compromised at all.  Added weight is about 150 lbs and trailer load is affected only by the same amount.  Performance should be hardly affected, especially if a slightly higher horsepower engine is used.  Such an engine is available at the same weight and size of the current recommended 50 hp unit.

According to some who have seen the drawings, the extended pilothouse actually makes an improved visual profile. An option has also been added for the sheerline that also mirrors another of the classic sheers of early last century.  It also provides a bit  more interior room over the counters and the dinette.