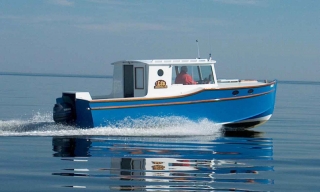 If you are looking for a cruising powerboat that you can trailer behind your family vehicle and still cruise in comfort in far away places, you have entered the correct harbor.

Bluejacket boats plane at low speed and never stick their nose in the air or create huge wakes. They need smaller engines than other similar sized boats and offer commensurate high fuel mileage for cruising economy.  Since LIZ was launched in 2000, the issue of fuel use has become of much greater importance.  Fortunately, the Bluejackets were designed with fuel economy as a major goal and high fuel prices are of much less concern to builders of Bluejackets.  Cruising comfort is not compromised as there are large berths in the  forward cabin and standing headroom in the pilothouse with excellent visibility at all times. A great feature is the private head with standing headroom in all Bluejackets which is very rare in boats this size. The Bluejacket has comfortable seating for captain and crew, lots of galley counter space and storage, plus plenty of fuel and water capacity.

In the powerboat world there are displacement boats, semi displacement or semi planing boats and full planing boats.  Displacement boats are restricted to speeds below the “hull speed” of the boat determined primarily by the waterline length. For most smaller boats this will be about 6 to 7 mph.  Planing boats can run at very high speed but tend to behave very poorly between their hull speed and up to about 16 to 20 knots.  In this range they will assume a bow high – stern down attitude, make large wakes, steer poorly, absorb gobs of fuel and be generally unpleasant to be aboard.  Unfortunately, this mid speed range is just where most cruisers would like to run if they had a choice.

This common characteristic is never relayed to a novice boat buyer by dealers or the sales brochures.  These usually show the boat happily zipping across the water at high speed or sitting at the dock with the crew lounging about with a beverage in hand.  Such poor behavior may appear for the first time when the proud owner takes the new boat out for a spin.  Often there is great disappointment and the boat may spend far more time at the dock than the new owner intended.  Perhaps one family member, usually the wife, does not like running at full bore all the time and the husband can’t stand idling along at 6 mph.  Of such circumstances are boat widows born.

Semi planing boats will run in the intermediate speed range but do require higher power and fuel relative to displacement boats.  They will generally be heavier than planing boats and still make large wakes when pushed into their upper speed range.

A boat that will plane at several times its hull speed and and also be comfortable and economical in the transition range while providing a high level of cruising comfort to its crew would be very desirable.  That was the primary goal assumed by the designer of the Bluejacket 24.

This goal and its achievement along with many other equally desirable objectives are described in a magazine article available by clicking “Designing Liz”.  A mostly non-theoretical look at the basic forces that allow a boat to plane on top of the water rather than plowing along through it can be seen by clicking here.

To read an account of performance and handling of the Bluejacket 24 in various water conditions, click here.

The ability to be trailed behind a family vehicle is paramount to achieving all the goals set for the Bluejacket.  This not only makes it possible to cruise in desirable waters far from your  home port but also drastically reduces the cost of owning and maintaining a cruising boat.  Cost of marina slip storage is very high and will only increase as available space is filled.  The ability to store the boat at home or in public dry storage allows a huge reduction in cost of boat ownership.  Even the cost of an enclosed boathouse can easily be offset by lack of marina slip and maintenance charges.